The City of Morgantown is the county seat of Monongalia County located along the Monongahela River and close to the Pennsylvania border in the north central part of West Virginia.

Morgantown, a city of distinction, offers "mountains of opportunity" for business development and expansion. This is one of the major growth areas in the state. Morgantown continues to grow and develop in many areas including housing, manufacturing, research, and commercial sectors. Morgantown shows continued population growth for the last 20 years, and is located in one of the fastest growing counties in the state. 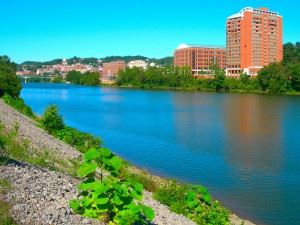 Morgantown and Monongalia County have consistently seen some of the lowest unemployment rates in the state. Some of the major employers in the area include the U.S. Department of Energy, the National Institute of Occupational Safety and Health (NIOSH), and West Virginia University.

Morgantown is the home to West Virginia University, the largest institution of higher education in the state with an annual enrollment of 26,864 students (Fall 2018) on the Morgantown campus. The city is the medical, cultural, and commercial hub of the region. Daytime population estimates 70,000 in Morgantown.